Glad to see there are others who think local business is key.
http://www.seattlenetwork.org/purpose
Vision
We envision a lasting prosperity grounded in place: a thriving regional economy, healthy environment, strong community, and happy residents. We believe that locally-owned businesses, in partnership with residents and other organizations, have a central role to play.

Cafe Aroma on 165th and 5th in Shoreline

Coffee is a commodity, like paper towels or tomato sauce.  Similar to many products, like chocolate, baked goods, and cheese, it’s served in hundreds of different ways, and there are hundreds of varieties, maybe thousands.  But around here, and I suspect it’s the case nearly everywhere in America, getting a cup of coffee is an experience.  It can make or break your morning.  But stopping at a drive thru isn’t restricted to our morning commute; we drink warm tasty beverages and snack on delicious goods all day and night in this town.

Whenever you’re north of 175th Street heading south, or south of 145th, heading north, it’s easy to jump off the freeway and make your way to the corner of 165th and 5th where you’ll find yet another example of a business owner who is doing her best to give something back.  I’ve come across countless examples of businesses where the owner simply was there for a paycheck, but that’s not how Lyanne Scott feels.  She’s the owner of Café Aroma, one of three major businesses who are helping to make this 4-way intersection a destination and not just a pit stop.

But Café Aroma wasn’t always the Shoreline iconic spot it is today.  This place grew out of Lyanne’s vision.  Owning an espresso stand wasn’t always her dream, but these days, it’s all she thinks about.

She moved to the neighborhood in 1998 when the building was a 1947 gas station which had closed in the 80’s.  The original owner ran a small construction business out of what is now the mail box shop, and the rest was storage.  There was a small espresso cart which was wheeled in at night.  Lyanne saw something special about this building and was so completely inspired that she approached the owner and asked if she could buy it.  On more than one occasion, her offer was turned down.  A few years later, the owners sold it, but not to Lyanne.

Lyanne couldn’t get the idea of this place out of her mind.  She drove by one day and noticed it was closed when The Crest theater was open.  It felt to her like a missed opportunity.  In her mind, she saw a rooftop deck and friends drinking coffee together.  Something even more fascinating is that Lyanne had never made espresso before.  But she was compelled, like many entrepreneurs.  “Seattle was at the heart of the espresso industry.” She says.

She wasn’t about to give up though, she bought an espresso trailer at an auction but struggled to find a place to park it.  Talk about putting the cart before the horse.  By this time, the new owner had taken over this corner spot she now calls home.

Nearly 10 years had passed now.  One day, after expressing again to her husband how badly she wanted to open up a shop here, he said “If you really want Café Aroma, just go ask her again.” Lyanne tried to talk to the new owner several times, but the owner was never there.  So Lyanne wrote a letter telling her that she wanted to buy the place.  The next day, the owner called.

Lyanne found out she had already offered to sell it to two different people who had passed, and one who was still considering it.  She told Lyanne “If they don’t want it, we’ll talk”.  Lyanne was excited, and her persistence finally paid off.  Lyanne was the new owner of Café Aroma.  She still has her cart, and has used it a few times as an off-site location.

“What I’ve tried to do is make it a place the community can come to, rather than just a drive through. “

For the first couple years, Lyanne kept her job as an accountant and worked at Café Aroma too.

“For 3 ½ years, open to close, 17 hours a day, I worked here.”   It was standing room only, so she moved some things around to make space for some tables and chairs.  People would come down with their dog and kids.  Being a mom herself, she really wanted to create a place for moms.

Seeing Café Aroma as a place to work, Lyanne also ordered the fastest internet speed she could, which is probably one of the hidden treasures of this corner store.  A small, locally owned coffee shop with blazingly fast internet?  Sounds like a good place to spend a few hours.

She even has a space for rent which has been used for birthday parties, wedding receptions, and business meetings.

Once she had all the systems in place to run the business the way it needed to, she turned her attention to the people.  I have to be honest, the more I work on this project, the more I’m in awe of the people in our community.  Lyanne exemplifies good-hearted.  She has a true caring and a desire to create something beautiful for people to enjoy.  This is why she’s tried so hard to create Café Aroma as a place where people can come to relax, see friends, and share a few minutes with others in their community.

Lyanne tells me about a time when one of her customers tragically lost their son shortly before his birthday.  She went to the memorial service and was blown away but the amount of love present.  There were hundreds of people there.  Lyanne felt she had to do something to help, so she created “Dean Day” and donated all of her gross sales for the day to the family.  The family chose to donate the money to North King County Little League and Feed the Children.  The event was a huge success which continued on.

To help get more connected to this remarkable woman, I asked her what her motivation was.  Why did she do this?  What compelled her to do this?  “I mostly thought about his birthday coming up and them getting through that day” she tells me.  “We became a venue for giving.  We became their way of helping…We’ve done that for 3 years now.”

When it was hard, when business was slow because of the recession, Lyanne stayed true to the course.  She believes in supporting the Ridgecrest Neighborhood.  “Café Aroma is part of this neighborhood.” “…the last few years, [besides Richmond Beach Coffee House] we’re the only sit down place in Shoreline that’s not a Starbucks that survived…It hit a lot of places really hard, but 2012, they all just closed the doors.”

With all the choices of places to stop, how do we pick ours?  What compels us to drive past two independently owned espresso stands and instead, go to Starbucks?  What is it that makes us see large chain establishments as “better”?  Here’s my theory, we’re disconnected.  We don’t know the stories of the owners.  We don’t see the impact of our decision.  We don’t see business ownership as an art form, to be marveled at and gazed upon.  I hope I’m helping you to see the impact it makes when you stop at Café Aroma for a cup of Joe rather than heading to just whatever is the most convenient for your morning drive.  Instead of running into 7-11 for some juice, let Lyanne get you one.  Instead of working from home again, go sit at Café Aroma and enjoy being part of what makes Shoreline the marvelous, heart-centered community it is.  Support Local Businesses, it’s the only thing you can do to set an example for big corporations.

Lyanne Scott and one of her fabulous baristas from Café Aroma

This blog, Urbanspending.com, survives solely from advertising revenue.  To support this project, please click the banner ads on the urbanspending page.  If you haven’t yet “liked” my Facebook page, or subscribed to the urbanspending.com blog and podcast, please do that too.  I promise to keep churning out well thought out, quality content, so please share this, and ask your friends to click my banner ads too.  Thanks.

Click Here to watch a video animation about my business philosopy

Get your customized business evaluation at www.OwnersReport.com

On the corner of 5th and 165th, is another gem of the city.   Many of us have been there, sometimes present to our own lives, and sometimes present to what’s around us.  But either way, I can say with almost near certainty, your experience was remarkable.  The barista smiled, your order came quickly, and it was delicious.  I know this, because I know the owner, and she wouldn’t have it any other way.  Next week, Lyanne Scott and I will catch up, and I’ll get a chance to present the real story behind the woman who found a way to change people’s lives, by filling their bellies with yummy goodness.  Stay tuned. 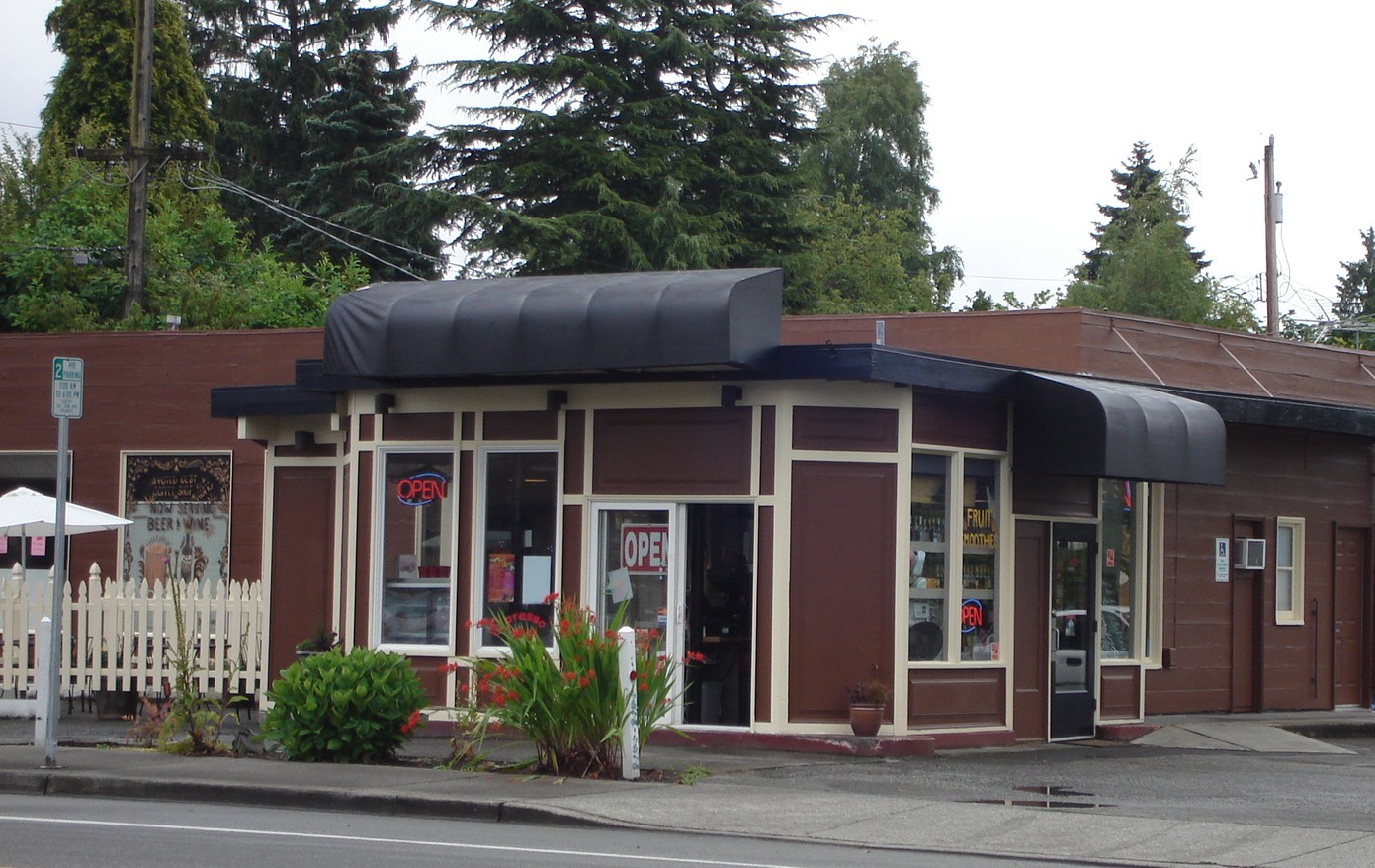 Support this project by making a donation

Enter your email below to be notified whenever a new audio podcast has been created.